When we moved into the house never could I have imagined that we would make such drastic changes to the living room and to some extent the bedroom too, but I’ll save that one for another day. When we first viewed the house, we loved its country feel but it was on our second viewing that I really feel in love with its cosiness. Looking back this was probably due to the fact that the log burner was roaring and during this time the heating wasn’t working properly so the only sources of heat in the house {bearing in mind it was November by this point} was the Rayburn in the kitchen and the log burner in this room.

To give you a virtual tour, from the hallway you enter the room down two steps, the house is very higgledy-piggledy like this. In front of you lies the inglenook fire place with a stone hearth, bread oven and wooden mantle. To your right, a door leading into the dining room and your left a large window with a window seat. Behind the door a sneaky cubby hole, what was it used for?! Who knows. All I know is that it is now a secret alcohol cubby hole. Annoyingly I have realised I do not have a photo of this before we gave it a makeover but here’s one of it all finished.

Now Matthew will attest that whilst I love creating things and decorating what I am best at is, destroying things. To be quite frank I rather enjoy it – rather therapeutic! So, it wasn’t long before I was tapping the walls down to see what was behind them and ripping up the corner of the carpet to check if the wooden floor from the hallway continued or not {to note it did – Jackpot!}.So almost immediately after we moved in, we got Christmas out the way first but the carpet had been condemned and the plaster around the fireplace was being removed. Underneath we found beautiful traditional stone walls that did require some, okay a lot, of TLC but beautiful none the less.

It was certainly a long, slow process after that, using a chisel and hammer to brake away all the bits of plaster and a load of concrete someone had decided to dump in there at some point. I didn’t use a mechanical hammer drill thing {I don’t know the names} as I didn’t want to break the stones underneath which was probably a good idea seeing as some were really brittle after years of being covered up. I broke away the top layers till we revealed a slight problem. In that the mantle was not load bearing as it should have been, the wood was distorted and suddenly we realised that the hole inglenook was at risk! Cue major panic from me and Matthew to the rescue to work out the logistics.

After my initial meltdown and with clear heads we concluded it had been there this long it wasn’t suddenly going to collapse on us {we hoped} but it meant the pain staking process became ever more so as I was petrified of causing an accident. To give us a little peace of mind we decided to acro-propp the beam but before this we also smashed out the old hearth (basically it was pure concrete and brick) that the log burner had been sitting on as we wanted it to be lower. This timed perfectly, for when we had a new flexi-flew installed and the log burner had a service. 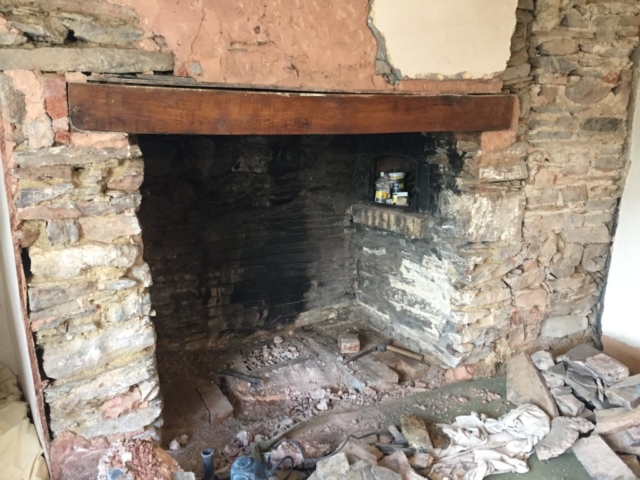 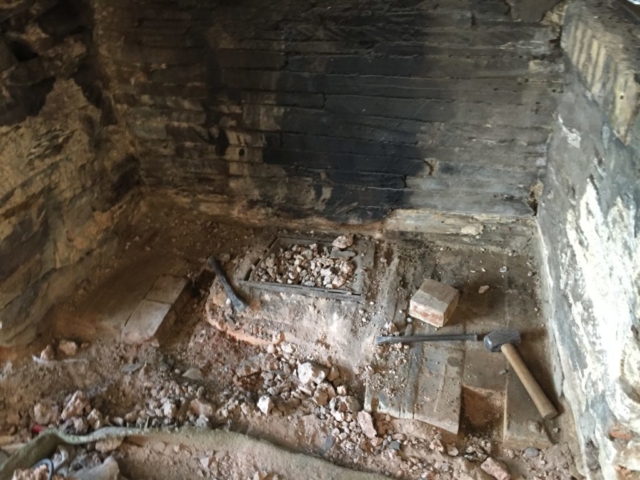 We decided it was best time we got in a professional to start repointing the stones and give them some stability, it also meant that when we found our new mantel piece it could be bedded in straight away rather than leaving it any longer. But where to find a piece of wood that was large enough and able to take the weight?!